Okay, so this blog has mostly been about crafting...but the title does include the words "my so called life." So I thought I would share one of my "bad girl" high school stories with you. Why you say? Well, I was inspired by this post by Cindy over at Cindy is crafty...and she makes things too.

Today I'll share a snippet from my Senior year.

I had a Psychology class. I had a love/hate relationship with the teacher. Mrs. Smith. At the time I felt she was a close minded, old, battle ax! Maybe it wasn't fair to the other students, but I sort of hijacked the class. We (Mrs. Smith & I...the class never managed to get a word in edge-wise!) would be discussing one thing or another from the book and Mrs. Smith, while looking directly at me, would make some black & white statement about it (the psychosis or whatever) being only one way. Me, being very "shades of gray" would start to argue with her about her "diagnosis."

I would actually (on my own time) go to the library to bone up on whatever the subjects were that we would be working on next. I wanted to have more information than the text book the school gave us could tell me. Mrs. Smith and I used the hour as a time to debate sort of like a Freud/Jung conversation!

Anyways, that's the set up!

The last day of school before Christmas break was traditionally a day that, last hour, (when I had Psychology) the Seniors would go Christmas Caroling in the halls. This was an accepted and much looked forward to tradition in my High School. On this day, I respectfully raised my hand and patiently waited for Mrs. Smith to call on me. (see what a good girl I was!) She eventually did (she had to make me wait to assert her superiority) call on me. I oh-so-respectfully asked if we (the Seniors) could be dismissed to go carolling. No response. I asked again... again no response, she just opened her book and started flipping pages. Me, being the only bold one in the class stood up and said to the class at large: "Who's with me? She didn't say we COULDN'T leave and go caroling!" All this time she just looked at her book, no response what-so-ever! 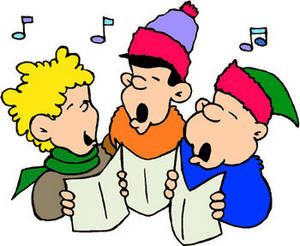 I managed to take half the class with me.

When we came back after Christmas break, Mrs. Smith was waiting by her desk with detention slips for us. I took mine, smiled sweetly and told her it was the most fun I ever had earning detention! (my only detention by the way, I really was a pretty good kid...no really).

I found out after graduation that Mrs. Smith took my Mother aside and told her how much she enjoyed having me in her class. That for the first time in years she felt challenged to do and learn more for her class. She told my Mother that if I chose, I would be a great leader.

The cool thing is, that was Mrs. Smith's last year of teaching. She decided to retire after that year. At our graduation ceremonies, she said she was pleased to be going out on such a good year with so many memories. I'd like to think I was part of those good memories - she is certainly one of the big positives that I remember!
Posted by Loralynn at 7:00 AM

Cool story. I always loved the teachers that challenged me.

Lora, could not find a place to contact you by email in your proflie---but YOU WON the tea cup pin cushion in my blog giveaway....please contact me thru my blog so I can get a mailing address. CONGRATS!