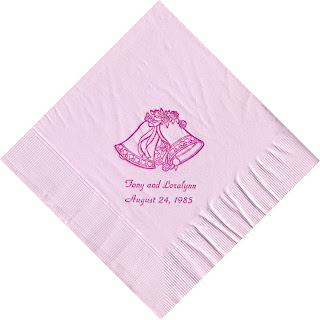 It was a dark and gloomy day. The rain seemed never ending. She knew that no good could come of the weather, she was afraid it was a portend of things to come....
Sounds rather like a victorian novel, doesn't it? That is exactly how my wedding day, 24 years ago today, started.
So, let me tell you a story about a man named Jed Tony...
The day of my wedding dawned rainy and gloomy. I was afraid that the weather would ruin the whole thing. I drove over to the hairdresser's to have my hair fixed for my big day. I made sure I carried an umbrella so my hair would not be ruined by the constant drizzel. Tug, pull, brush, curl, spray, pin, spray. I felt like a child's doll who was having her hair brushed after many days of neglect. As I looked into the mirror, I decided it was all worth the painful scalp. I had the curly, victorian upsweep that I had imagined for my special day.
Leaving the hairdressers, there was a momentary respite from the rain. It lasted until I entered the house, then began again.
A little later, the limo (which had been a wedding present from my Mother's best friend Jeannie) came to pick us up. As luck would have it, the rain had again abated temporarily. I was in the process of taking my hat out to place it in the limo, when a gust of wind came along and snatched it out of my hand...and dumped it right in a muddy water puddle. Using a word I don't normally, I threw my hands up in the air and said "The whole ****ing thing is ruined!" The limo driver rushed to open the door as I retrieved my hat from the ground. Shaking off the water, I tossed the hat in the back seat. Stressed much??? No, not me!
My Mother, maid of honor (Tiffany), and I climbed in the limo. The driver suggested that we open the bottle of champagne that was awaiting us for after the ceremony. He said he would go purchase another one while he was waiting for us. Me, not being a fan of wines in general, had no problem drinking a couple glasses of what he offered! It was much appreciated and helped calm my nerves.
Jump forward in time to saying the vows, as everything up to that went as expected. Just as we turned toward each other, a ray of sunshine shone through the stained glass window. I felt like it was God giving a blessing to our marriage...something I felt we needed after the morning I had had!
Flash forward again...we're driving down the road. My (now) Husband and the best man (Darryl) are standing up, heads out the sunroof toasting the cars that go by. Mind you, the wind is sluicing the wine off the top of their glasses...right onto my maid of honor and me!!
We stopped at a store halfway to the reception hall, to get the guys another bottle of wine (we girls were wearing half of what they already had). Remember all the rain? Did you know that rain makes things slippery??? Well, you guessed it, just as I was walking in the entrance to the store...down I went! Mud and grease all up the back of my skirt! Truely, at this point, I just didn't care anymore!
When we arrived at the reception hall, my attendants helped me bustle my skirt up and... lo and behold...you couldn't see the mud! Awesome! The rest of the evening went as expected...rushing by in a blur of family, friends and dancing!
Following are a few of my wedding pictures: 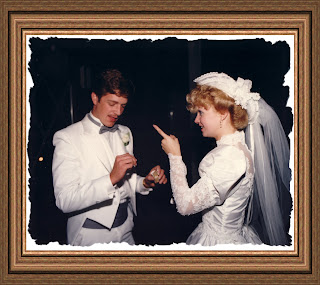 Some things haven't changed. I often wag my finger at Tony, telling him he shouldn't do this, that or the other. By the way, yes, he shoved the cake in my face. That hasn't changed either, he still doesn't listen to me! 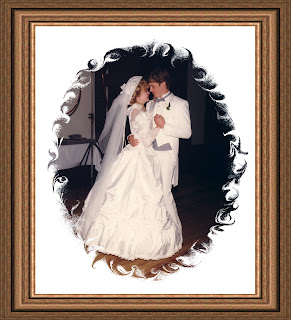 Our first dance as a married couple. We still love to dance together! 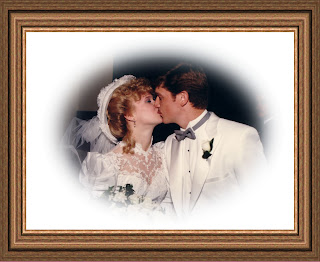 There is a moral to my above story. My wedding day was full of up's and down's. Moments of joy and moments of despair/anger. In the end, it pretty much went as expected. That pretty much sums up our last 24 years. We've had great highs, and some very bad lows. Most importantly, we have shared a LIFE together. Life is never easy and neither is marriage. I would do it all again in a heartbeat. To paraphrase Stitch from Lilo and Stitch: My family is sometimes broken, but it's good...yeah, good.
Thank you honey for the last 24 years and here's to 24 more!

Yay! Congrats! Those photos are priceless.

I had to laugh when you described your meltdown after your hat fell in the puddle. *My* meltdown was when a friend sat on my veil! We have a picture of said (male) friend, looking slightly baffled, holding a hairdryer to the wrinkles while another friend pulled on the veil to "iron" them out. (Oh, and we celebrated 14 years on the 13th.)

That was good reading and brought a lump to my throat. Congrats on 24 yrs of marriage and may you have many many more years together :)

Happy Anniversary, Loralynn! Love the hat! ;0) Here's hoping you surpass 50 years! That always seems like a magical number to me.

It rained on my wedding day as well. There is a saying that rain on your wedding day means an absence of tears in your marriage. I think it's true!

Wishing you both a Happy Anniversary!

L- Wow. You brought tears to my eyes. I love reading your stories. Love,love,love. I know you leave out a lot more that could be written; maybe because it's a blog and there not suppose to be verbose (one of your words). Even so, what you do put down in ink (htm) makes me feel like I'm right there. In the case of your wedding, I was right there! It was a beautiful day, despite the drizzle (and, yeah, down pour). You two are beautiful together. I can feel how much you love him. And I know he loves you too. Happy 24.

Happy 24th to you both...a wonderful accomplishment to stay together through all the ups and downs of marriage.
Mr. Honey and I just had our 28th!
x lori

Congratulations. My meltdown almost happened when I stepped on my dress, and the ribbon trim ripped. Luckily my photographer whipped out her needle and thread. Your story is something though!

Where's the "Like" button? :) Great post and I'm happy you shared some photos. A belated congratulations on yours and Tony's 24th anniversary!