The Week from Hades...

That's what last week was, at least for Baby Girl. After she got back from trick-or-treating, she started coughing. Not a big deal, I figured. She does that sometimes because of allergies. I gave her some Benedryl and Spartan and I went off to our adult Halloween party.
I dressed in Spartan's old military outfit (he even let me use his "good" red beret...he was in special forces back then) and Spartan went as the Molinator. I don't think most people got it. He was supposed to be like the tooth fairy on steroids. I thought it was very humorous! 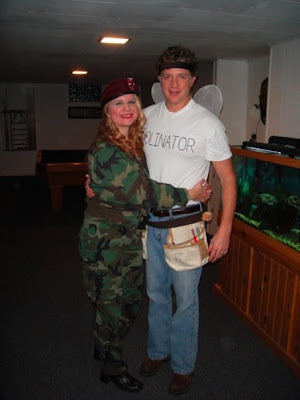 Here's me with "my girls." Me as special forces, A. as a TGIF waitress, B. as a Teenage Mutant Ninja Turtle and F. as a jellyfish. 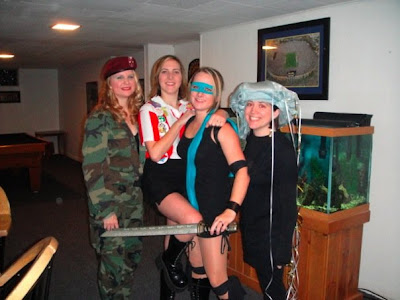 We had a blast at the party. We had planned ahead of time to spend the night at A.'s house since it was a bit of a drive for us.
Next morning, I get a phone call from my Mom telling me that Baby Girls temp was at 103. Home we went. She did okay the rest of the day with just some meds. Monday...not so much. Baby Girl always runs higher temps than most people, even when she was teething she'd run 102, but, even so, when her temp gets to 105 I get a little stressed (read: panicky). Wednesday got her into the doctor...tested her for H1N1...results: negative. Thank goodness! After writing us a script for tamiflu, an antibiotic and a pill to stop her throwing up, the Doctor sent us for x-rays. Thursday, after being on the meds for about 18hrs, she felt great! I got the call telling me it was not pneumonia. Again, thank goodness! She was still running a temp, but it was manageable. Friday...she was all better and driving me crazy with being wound up! I think that when kids are sick they save up the energy they would have used and unleash it on their parents all at once! That's okay...that kind of obnoxiousness...I can live with!!
Posted by Loralynn at 6:19 AM

The party looked like a blast! That terrible flu - I hope you get to feeling better quickly.

I wanted to give you a heads up that TipJunkie.com is doing their 12 Days of Junkie again. I hope you'll head on over and participate like you did last year.

Hope to see you there!!

I think it is the build up of the meds, too. I usually get insomnia toward the end of a cold or flu as I am coming off the cold meds.

Glad that she is all better now!

Love your costumes! Looks like fun. I'm glad baby girl is better now - I hate those high fevers, they are SCARY!