Finally! Blogger has been being a butt-head and wouldn't let me upload pictures for the last couple of days!

This is the most recent block in the Once Upon A Time BOM. It is Snow White and Rose Red. I decided to use ribbon roses instead of just embroidering them. They are my first attempt at ribbon embroidery. Not bad considering I just used the cheap-y ribbon that you get for $.99 a spool. 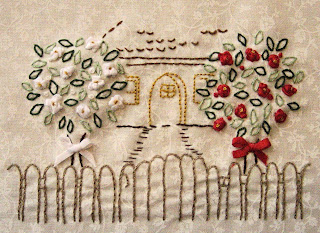 I am trying to decide what to do now. I'm kind of in a slump. I can't seem to make up my mind on anything! I just flit from possibility to possibility. I have new material I could make...something with. I have new floss I could embroider...something with. Or, I could just go take a nap. I think I am in the pre-spring, pre-warm weather dumps. Oh, did I mention that I'm 44 and I seem to have A LOT of the perimenopause symptoms? White hair multiplying like rabbits, forgetful, moody, forgetful, tired ALL the time, forgetful, can't sleep at night, forgetful...whine, whine, bitch, bitch, complain, complain...sorry, it's one of those days.

Did I mention forgetful???
Posted by Loralynn at 5:13 AM

I have an answer, come join my Rainbow Swap!!

Your embroidery is pretty and I like the fabric you stitched it on. I vote for taking a nap. Or hey, how about trying some of those games on Facebook? (If I wasn't taking the stoopid quizzes all the time, I'd be looking for an armadillo orwhatever it is.)

You embroidery work is adorable. Great stuff on your blog. Thanks!