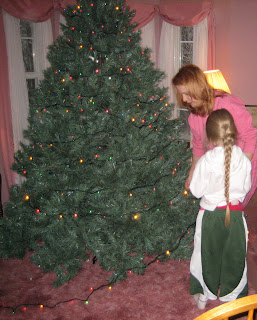 We put up our tree on Sunday. It was actually very relaxing for once. My oldest two decided not to fight and they actually hung around and helped with the lights and garland after we got the tree put together. This is not normal for my boys, they usually grumble about putting the tree together and then run off until it is time to put the ornaments on. Of course, they don't realize it, but by doing this, they made putting the tree up this year even more special! 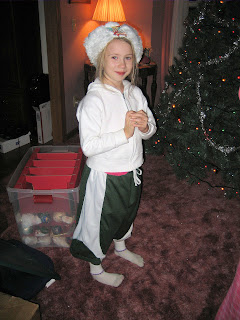 Here's Baby Girl in her Tinkerbell Christmas hat and Runner's Michigan State Shorts. She was temporarily known as Fairy Gangster!

Speaking of Baby Girl (aka Fairy Gangster), she followed through on a tradition SHE started when she was 11months old! Since she was born on the 29th of December, her first Christmas was when she was almost a year old. I have gotten a special "Babies First Christmas" ornament for each of my children. For Baby Girl, I found the cutest pink pacifier. Well, when we showed it to her (at her first Christmas), she grabbed it and popped it in her mouth! The boys all thought it was hysterical! Boy Genius, then 7, was actually rolling on the floor laughing! Well, ever since then, with a little nudging and reminding from her brothers, Baby Girl has had to put the pacifier in her mouth before it can go on the tree. So here she is, my almost 8 year old, sucking on her binkie!! 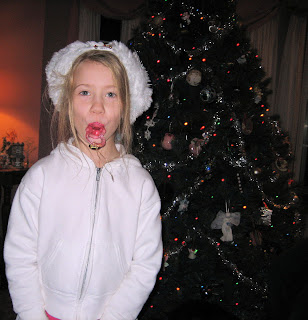 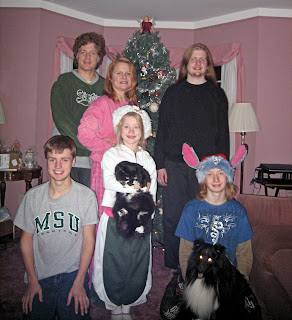 What a beautiful tree! Looks like your family is definitely in the holiday spirit!